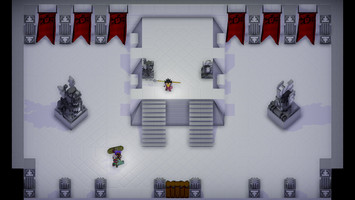 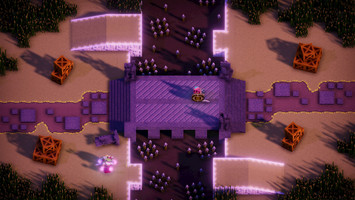 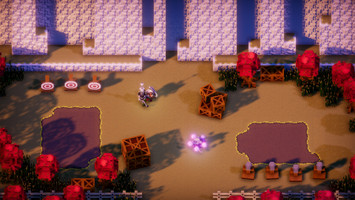 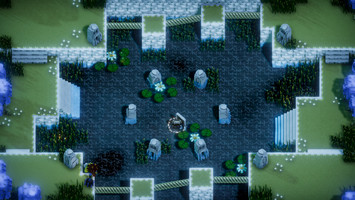 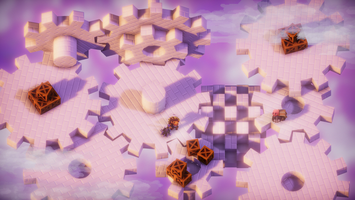 The big new change in the Big Stage Update is the stage count. Five new stages have been added: Pedestal Room, Stone Bridge, Cliffside, Wellspring, and Old Machine have been added. In addition to the new stages is a new stage select, a universal foot stomp,  a new character, and two new items. I'll go through the list one by one.

Pedestal Room is a horizontally symmetrical dungeon room with one large platform 3m above level with two giant statues flanking either side. Wall-jumps can be used to climb the statues or as another vector to approach the center pedestal. The pedestal can also be used as a jump-off point to get to the top of the statues as well. The six flags along the back wall can be used as cover, but may not be sufficient to hide in smaller battles. The Capture Point appears on the pedestal, so maintaining the high ground is an important strategy.

The high ground for the Capture Point emphasizes ways to climb terrain. Walking up the stairs is easy, but you will have to have a shield or bait attacks. Some weapons like the Long Fork, Spear, or Book of Orbs can help in pushing back any high ground defender. If the fight moves away from the pedestal then it'll revolve around the two statues or result in clashes along the long lane in the middle.

Stone Bridge is a rotationally symmetrical stage with a moat full of stakes crossed by the titular Stone Bridge. The bridge itself is 0.5m tall, so projectiles can be freely shot across while boxes provide movable cover in the corners. Jumping across the stake pits is possible with all characters, though Dash Shoes, Jump Boots, the Displacer Tome, the Chain Hook, and the  two ramps all assist in the traversal. Jumping over the moat as an escape from a slower, less agile enemy can be an effective strategy. The Capture Point appears without much cover dead in the center of the bridge.

Cliffside is a training ground along the base of a cliff. There are alcoves on the cliff face from which players can perch, and there are a few hiding spots amongst the trees. The boxes and training dummies provide cover for the wide horizontal lane through the middle of the stage. Making the most out of the small amount of cover is key. The Capture Point appears inbetween the crates. I wanted a simple stage with one lane and a few obstacles. The hiding spots on the cliff face were a happy accident, but they tend to make for unintended but interesting moments.

Wellspring is a large water map with many nooks and crannies to traverse. The raised perimeter provides vantage points to fire projectiles into the middle, and the water and statues do not help with maneuverability. There are a few hiding spots in the alcoves around the pedestals and behind trees, though the best hiding is keeping distance. Nimble maneuvering over the rope bridges will help keep enemies that chase away. If the battle makes it to the Capture Point in the middle of the stage, weaving around the statues helps keep the point defensible.

I really like how wide open this map feels. The edges are quick to traverse, but moving slowly through the water makes the map feel even bigger. You can still utilize high speed characters from the middle, but they have to jump from statue to statue.

And Old Machine is a map full of moving gears. Outside of the gears rotating all at different speeds, a fall from Old Machine means death. Weapons with large hitback and projectiles are effective on this stage as is taking a risk and jumping from gear to gear. Larger shields may prove to be a liability with their large hitboxes. The Capture Point appears on the small gear in the middle, but dropping the center hole in the gear does not count. I wanted to make an asymmetrical map, and I think this works. Initially this map was 50% faster and had a few more holes in the gears, but that was a little too fast.

I've wanted to make non-melee non-magic builds viable, but once players ran out of ammo, they wouldn't have any way to win. It was super risky and not very fun. I came up with the idea of a foot stomp months ago and attempted it, but it didn't work how I wanted, so I tabled it. In the month before 2DCon, though, I was able to test out the Foot Stomp, and I think I finally got it to the point where I'm happy with it.

Foot Stomp is a Power Attack activated by Air Neutral A. That means in the air you let go of the analog stick and tap the Jump button to slam down into the ground. It only does 1 damage and 15f stun, but it can be Dash or Jump Cancelled. This is a viable strategy against turtle-y players that utilize their shields passively. Foot Stomps will generally lose out to evasive enemies, parrying, or weapons with a vertical component.

Three Eyes is a  new mage character. She only has 5 health and is below average speed, but her versatility and magic make up the difference. She starts with a Bolt Javelin, the Displacer Tome, the new Golden Familiar, and the Red & White Shield. She can be a ranged mage or a battle mage depending on the situation.

The Golden Familiar is a cat cast in gold. For 5 magic it casts a lightning bolt in front of the player. The bolt hitbox extends 8m upwards, so it can be used to defend against jumping enemies or enemies from above.

The Musket Foil is part gun and part sword. Its Foward Attack is a 2 damage Backhand Slash. It shoots a 2 damage bullet from Neutral. And from the air it does a 2 damage slash down. It is not the fastest gun, and it is not the most versatile sword, but it does spread its versatility over a large range. It pairs well with the item bag.

And that's it! Cheers, enjoy.