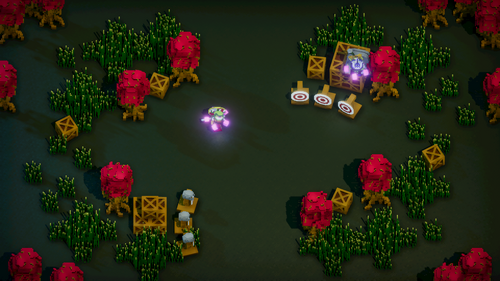 Wow! There've been a lot of changes since the last devlog update. I'll try to go over the bigger changes, and then I'll go over a few tweaks that I thought were interesting.

The Dagger is an assassin's weapon. It does big damage, but you have to get in close. The Neutral and Air Forward are big damage stabs while the Forward and Air Neutral are quick emergency slashes. The slashes on the Forward especially are really good at parrying and countering quick attacks such as the Long Fork's reach around.

The Magic Strings and Drum both are useful for an aspiring bard or team player. The Strings' box can be swung around with either Air or Forward attacks, but its neutral plays a melody that inspires Magic generation over time. The Drum is a lot quicker - it has one very quick area of effect stun and a beat that makes you and adjacent characters move very quickly.

The Item Bag lets you dig deep into your pockets to Restock more ammunition for your tools. Using it in any way will discard all your ammo and replenish all your ammo at the same time. Be wary of being knocked out of the animation early, though. You will lose one of your Restocks in addition to that health.

The Jump Boot lets you get into the air quickly. It's useful for somersaulting over horizontal attacks or being very aggressive with the more acrobatic items. It also has one more trick - it has full turn to get a little extra tracking on those heavier weapons.

All Shields will return a small amount of stun when they are collided with on your side or back. But if you put your shield out in front of you, there is a 15f window where you can nab a Power Block. In the case of a Power Block each shield returned stun at a large multiplier of the original stun, and now each shield will also return a flat bonus to that stun as well. The buckler does 30f of Power Stun and the Tomb Shield does 0f of Power Stun. Very powerful stuff.

The Grand Blade got a new slash. Its moveset before was unwieldy and slow, so I rewarded the slower attacks with more damage and replaced the more unwieldy attacks with more straightforward attacks. Air Forward does the same damage as before, but it is now much more reliable. Ground Forward now does a whopping 6 damage if you nail it right, but it's more the threat of big damage that does it. Ground Neutral is the fast wide backhand swing, but it now finishes with a small hop so you can Air Neutral in the opposite direction. The option to go back and forth between the two is very dangerous.

Iron Lance got a new shove attack. It's not amazing, but utility rarely is. If someone is in your face you can shove them. It's fairly wide, not too slow, and if you nail a counter hit you can get enough stun on this one for a big pierce.

Drain Blade's moveset had to get changed. It was too much utility,  so I made it more dangerous. The wide backhand swing is now the Forward attack. You can also Neutral or Air Neutral and go for big damage on the forehand double swing. And the Air Forward is a great downslash to get over shields.

And one of the most important new moves is the Temple Codex's new Shell spell. Shell protects the caster from any one attack. Well, technically it protects the caster from any attacks for 0.05s (or 3f) after the first hit is registered, but its main purpose is for Temple Codex characters to be able to throw down lightning on any aggressor or be an aggressor themselves. Shell only lasts for 3 seconds, so maybe it should be called Fleeting Shell.