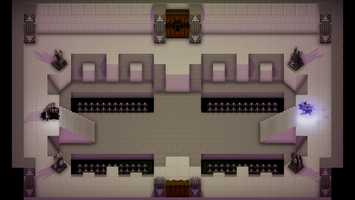 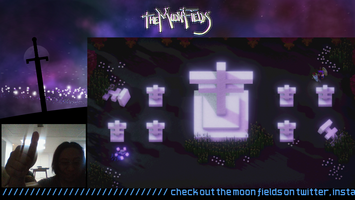 I'm shaking up a lot of things in The Moon Fields, and I'm hoping to test and tweak this stuff before the next couple showcases. I'm very, very interested in feedback overall, so please get at me if you have any strong feelings either towards the old system or these new systems. Let's do a big list of the major changes:

I've been wanting to increase HP for a while now. I hesitated because I didn't want to kill the pacing of the game. I still want rounds to be quick and breezy, but I want people to do do a little more work to get the KO. Many attacks have been buffed to do more damage or have more stun or just be quicker, but they also have more motion and are more chaotic. The flat buff helps lower HP characters more, though I imagine the 8HP tanks should still be terrifying.

The new items are: Bolt Javelin, Broadsword, Dragoon, Drop Bomb, and Sunstick. There are also dozens of tweaks to items to emphasize some fundamental mechanical techniques.

The Bolt Javelin and Sunstick are both magic melee items that should be exciting to use with lower magic characters. The Bolt Javelin is a shorter range spear than the Winged Spear, but in the air it has a diving attack and a magical throw. Because it has low capacity (2 ammo per slot) and its magic requirement, it should make for a good secondary weapon to surprise opponents. The Sunstick is a power stick that has a really great defensive spin attack on Neutral that should protect your unshielded side really well. Make sure to use the Dash/Jump cancel to get out of it and back into the fray.

The Broadsword is a cross between the Battle Axe and the Knights' Sword. It has short range like the Knights' Sword, and it is relatively slower like the Battle Axe, but its speed sits inbetween the two, and it has really amazing versatility with both quick forehand and backhand swings to be able to both get around shields and cover a larger horizontal space. If you're using the Broadsword you should get up on your Forehand/Backhand/Shielded Side/Back Shield game.

The Dragoon and Drop Goo are both kind of fun items that came about because I want to expand some current systems. The Dragoon (and other projectiles) necessitated me adding an "aiming mode". Use the Neutral Dragoon (or Pistol or Crossbow) to bring up a sight to help with aiming. This replaced the Explorer which may or may not return. The explorer was just too expensive of an item in terms of item slots. The Dragoon differentiates itself from the pistol by having low ammo, slower (but more damaging) bullets, and a muzzle flash that does quite a lot of damage. The Drop Goo  expands the black goo arsenal by being much more accurate than Throw Goo. It self ignites, though fire damage comes much slower than the Drop Bomb's explosion damage.

The Cemetery is a dark place where dark things happen. There are lots of places to hide traps, and lots of graves to perch from. The central grave should be tall enough to defend against a lot of ground level attacks, though it does have a very obvious hiding spot behind the large gravemarker.

The Pit has a lot of verticality and one main dueling lane. It is probably the tightest of all the stages, and the catwalk around the upper perimeter really needs you to understand the directionality to your melee attacks. The spikes make the stage a lot smaller than it should be, and if you've got some pushy weapons (or a heavy shield!) you can push your enemies into a (pointed) corner pretty easily.

And last but not least, the three characters really flesh out the field. While The Crown is fairly average, both Ogre and Eye Knite are fairly strong with magic. All three should be able to do magic melee very well.

One last thing! I updated the Streaming Kit. It has a light and dark mode, and it should be a lot simpler. I should be streaming ~7p tonight on my twitch channel.

And that should be it! I have some announcements regarding conventions and tournaments and exhibitions soon, but, uh, those will have to wait a bit.

Just so ya'll know - the big experiment was a success.