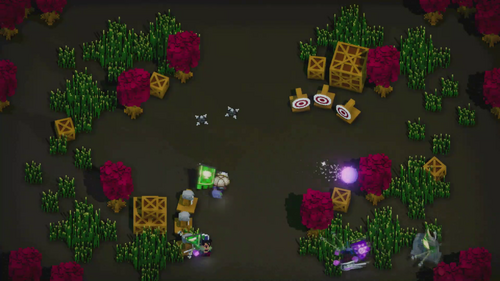 Hooboy, a ton of updates for ya'll today. There are some quality of life updates, some balance tweaks, and one whole new attack. We'll start with the new stuff after some updates on non-game stuff.

Since the last update Paul showed at Daisho Con in The Dells, and I showed at Playtest at The Logan Theater in Chicago. Both events went pretty well, and we met lots of cool people. I did not win the booth at C2E2, but that's fine because these cool guys won. I have one last Local MKE Gamedev Showcase at 42 Ale House (it's the last one Raid+ is hosting!), and then 2017 is over for showcases. I'll start up again in February because I just got word from Anime Milwaukee is going to have an indie exhibit and I'll be running it. Also, Indie Arcade 2018 is the day before. 2018 is creeping pretty fast.

Anyways, game stuff: The Goblin Head needed some working to do. It's meant to be dangerous in the air and a hassle on the ground especially against slower, shielded enemies. I toned down the air flames from 4 to 3, let it Quick Turn, and tightened the arc.

Before discussing the Goblin Head any further, I need to discuss Quick Turn. Quick Turn is the amount of rotation a player has on activation. Characters have a turn rate of 720*/sec, so when the Player changes direction, the Character takes a few frames to play catchup (15 frames for a turn).  Quick Turn is activated when an attack is started, and it turns the Character that many degrees instantly. So while the Air Flame had a Quick Turn of 0 and a wide arc with lots of flames before, it now has a Quick Turn of 45* in either direction and a tighter arc with less flames. The attack is weaker overall, but it's more concentrated, and more aimable.

The forward Ground Flame was pretty weak except against the slowest defensive players. I bumped the Quick Turn and gave it a wider 2 flame attack to cover more ground. If someone has the Goblin Head you should be looking for their back, but running askew should be enough to misdirect them as well. If you find that the startup is too fast, please get at me!

The biggest change to the Goblin Head is the neutral Flame Blast. This is a 4 flame attack that takes about a second to activate. Because flames and explosions bypass shields, this should see a lot of use against shielded enemies. It's also really genuinely a cool attack, so whatever, flame throw it up.

The two quality of life updates are the minor glare on shields during their parry state and defaulting the resolution to 480x270. I've been getting into playing the game at high resolution, but most folks have been telling me they like the low res look and mostIntel laptops without dGPUs can only get 60FPS at that resolution anyways. YMMV. Oh, yeah, I promise to add some kind of options saving soon. Sorry?

And lastly other balance tweaks! The Temple Codex heal is a little too strong in multiplayer. I wrecked house 1 vs. 4 more than a handful of times because people just weren't taking advantage of the heal. I slowed it down. Part of the reason is because the Tomb Shield or other back shields are just so strong - since implementing the Tomb Shield I've cut its HP in 1/2! In general shields are more breakable now. I don't know if I like it. I'm tempted to make it so that they don't take damage when you bring them to your front, but I'm not so sure yet.